Recent editions of the Museum Newsletter from 2014 onwards can be downloaded from these links;

Question: I’m doing a textiles project on the Battle of Waterloo. Do you have anything in the Museum from 1815?

If someone had asked this question before March, the Documentation Officer would have gone trawling through card indices reading every card until she found something; those indices were useful but limited. We are currently inputting all the information about the Textiles collection onto the Museum’s computerised database so that we can search for any year, name, number or even word.

In recent years, the Museum has steadily been inputting various collections such as the Herbarium, the Organic store, the Ethnography store, and the Photographic collection onto the database in the same way. Some work on the Textiles collection has already been carried out by volunteers such as Gillian Herbert and Barbara Stubbington.

However, the Museum is currently taking part in a Lottery funded, Essex wide bid to make the Textile collections better known to the public – known as the Living Costume Project – and so it is working through the whole collection to computerise it. The Living Costume project will involve us in a small travelling exhibition (the Roadshow, coming in November) and two Workshops in June, as well as the above-mentioned documentation and other spin offs.

Answer: Silk Ballgown worn at the Duchess of Richmond’s ball on the eve of the Battle of Waterloo in 1815.

There was great excitement at the Natural History Museum, London on 9th May this year. Most of it was focused around the giant skeleton of a fossil Diplodocus, with people having their photos taken with it and children doing a jigsaw of the dinosaur. However, I was excited about a much smaller beast as I was there to collect Saffron Walden Museum’s type specimen of a fossil shell. A type specimen is the one from which a species is first named and described – the reference material for future taxonomic studies.

The shell is that of a marine snail called Helix rysa that lived in the Red Crag Sea 2 million years ago. The specimen was collected by George Stacey Gibson at Walton-on-the-Naze around 1840. The species was described from this shell by S V Wood in 1848 in the Monograph of Crag Mollusca.

The shell had been on loan to the NHM since 1961. As part of the process of Accreditation, Saffron Walden Museum reviewed its long term loans and the NHM agreed to return the specimen if a cast could be taken and stored in the institution’s collection. Because of its importance, it will be kept in secure storage and made available for research by request.

Dagger from the hill country around Madras, India

The lab has been inundated with swords, cutters and knives of all descriptions during January, in preparation for the Blades exhibition. The collections came in relatively late due to the Display Officer departing for pastures new, and the pressure was on! Almost 40 items passed through the lab in the space of 2 weeks for treatment and stabilisation before display. This could never have been achieved without the help of three dedicated volunteers who assisted the conservation officer.

The treatment of most blades was simply achieved using the finest grade of wire wool and 3-in-1 oil, except brass and silver finishes which were cleaned using a mildly abrasive non-scratch paste on cotton wool. Residues were removed with white spirit, and surfaces protected using microcrystalline wax, which dries glass clear. Archaeological metalwork was treated by corrosion removal using a jet of compressed air and fine aluminium oxide powder, before a protective coat of clear lacquer.

On a topical, though more domestic note at marmalade making time, an early 20th century orange slicer was also given attention!

In the pub at Henham 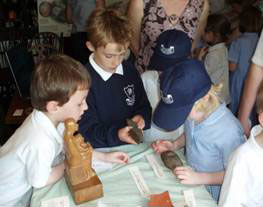 So on Wednesday, 10th May, the front bar of The Cock Inn, Henham, was taken over by an archaeological display from Saffron Walden Museum, complemented by information and documents from local history researchers.

In 3½ hours, about 180 people, including 130 children from Henham & Ugley Primary School, had come to see the finds, which included objects from Henham and a selection of Roman archaeology from sites across Uttlesford.

Such events provide an opportunity for museum staff to learn and gather information too. I came away with notes about a number of interesting historical facts and finds produced by local residents, many of whom would probably have not come to the Museum. In the course of researching Henham finds in the Museum’s collections, I was able to make a few new links and fit the archaeology of this historic rural parish into a wider context for Henham residents.

However, even for one outreach event like this there is a lot of time-consuming preparation, which only emphasised the need for improvements in storage space, computer database, staff and resources which the Heritage Quest Centre will bring.

A rare volcanic rock called Rhomb-porphyry has been found in Essex. The pebble is about 10cm long; the matrix of the rock is brown in colour and it contains large crystals of grey-white feldspar. It was brought to the museum to be identified, and specialist help was needed to name the specimen. 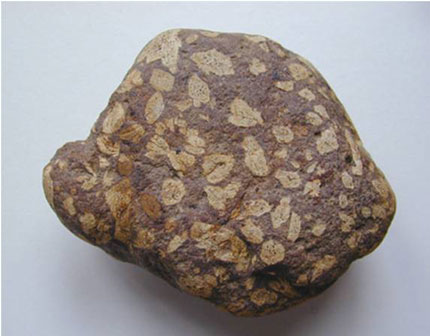 Rhomb porphyry is a volcanic rock with gray-white large porphyritic rhomb shaped phenocrysts embedded in a very fine grained red-brown matrix. Brought to Essex from the Oslo graben in Norway by glaciers.

The rock was found at Hatfield Broad Oak under a hedge by a sharp-eyed lady whilst out walking – but it originated in Norway! The specimen was moved to Britain from Scandinavia by glaciers that crossed the swampy North Sea basin during an Ice Age 450,000 years ago. When the ice melted, rocks carried by the ice were left behind – such rocks and boulders are named ‘erratic’ because their geology is so different from the surrounding local rocks; most originate from elsewhere in Britain. Although specimens of Rhomb-porphyry from Norway have been found in Norfolk, they are very rare in Essex.

A selection of glacial erratics is displayed in the museum grounds and includes a boulder weighing over 2 tons that was found in Saffron Walden.

We are delighted to advise you that this rare specimen has been donated to the museum for the Geology collection.